We would like to note that according to the accepted chronology, the Hellenistic period continues until the Herodian Period. However, for various reasons (some technical) we have divided the period and call the 2nd part of this period the “Hasmonean Period”.

The Hellenistic Period in Judaea began with the conquest of Alexander the Great in 332 B.C.E.
and ends under the Hasmonean ruler John Hyrcanus in 135 B.C.E.

After Alexander the Great’s death in 323 B.C.E. his territories were divided between his officers (the diadochi). Ptolemy ruled over the eastern part of the empire and Seleuces ruled over the western part.

The Yehud coinage which started in the Persian period continued into the beginning of the Hellenistic period. Although the motif “YHD” was kept, the devices (pictures or images on a coin) were changed. There are some very rare specimens that bear the portrait of Ptolemy I and/or Ptolemy II.

Ptolemy I and Ptolemy II seem to have had different attitudes to the Judaeans, although Ptolemy I may have moderated his antagonism toward the Jewish people later in his reign. Josephus recounts how Ptolemy I took Jerusalem by entering on the Sabbath as if he was coming to offer sacrifices in peace. After conquering Judaea and Samaria, he brought many Jews and Samarians back with him to Egypt, as slaves. According to Josephus, his son Ptolemy II Philadephus later freed those slaves at great expense to the royal treasury. It was he who paid his respects to the Jewish high priest and requested that 70 Jewish elders be sent to him in Egypt to translate the Torah. The translation was indeed completed in the Greek tongue and is called the Septuagint.

The land of Judaea served as a crossroads between the Ptolemaic and Seleucid empires, and was initially under the control of the Ptolemies. After several territorial disputes the Seleucid King, Antiochus III wrested it away for good from the Ptolemies in 198 B.C.E.

Antiochus III for the most part treated the Judaeans kindly, especially in the beginning of his reign, and granted the Jewish people various privileges.

In 187 B.C.E. He was succeeded by his son Seleuces. Seleuces ambitiously tried to take funds from the treasury of the Bet HaMikdash. He dispatched his official Heliodorus to confiscate the funds. Josephus relates the story of a miracle which prevented Heliodorus from confiscating the funds, wherein he was confronted by a divine figure on a horse and beaten by two young men who appeared miraculously. He returned to Seleuces emptyhanded and a short time later Seleuces was killed.

The next King to ascend the Seleucid throne (175 B.C.E.) was the brother of Seleuces, Antiochus IV who called himself Epiphanes – meaning God “manifest”. Antiochus was the cause of great tragedy for the Jewish people, and the eradication of his wickedness and those of his followers is celebrated today with the holiday of Chanukah.

Antiochus who fancied himself a God wanted to go down in history as a great conquerer and hellenizer. In 168 B.C.E. after victoriously taking Egypt he was confronted by the Romans. The Roman ambassador drew a circle in the sand and told Antiochus not to step out of it until he decided whether he would leave Egypt, or alternatively, enter into a conflict with Rome. Antiochus deeply humiliated and extremely angry, left Egypt to return to Syria. Judaea was directly in his path. To make matters worse the Jewish people had heard rumors of Antiochus’ death and used the opportunity to revolt against his stooge the corrupt hellenizing High Priest Menelaus.

Antiochus entered Judaea with a fury, massacring Jews and looting Jerusalem. He abolished worship in the Bet HaMikdash and outlawed practice of Judaism on the pain of death. In December 168 C.E. corresponding to the 25th of Kislev a statue to Zeus was set up inside what remained of the smashed Temple. On it the flesh of a sow was offered as a sacrifice.

Soldiers and officers were despatched all over Judaea to force the Jews to sacrifice to Zeus. In Modiin, the Seleucid officers were defied by Mattathias the Kohen. After killing several Syrian troops, Mattathias and his sons led their followers, the “Hasidim” in open rebellion against Antiochus and the Seleucids. Their family was the Hasmonean family but are also popularly known as the Maccabeans after the title of Mattathias’ third son, Yehuda, named Yehuda HaMaccabee “the hammer”.

After the death of Mattathias, Yehuda led the armed forces of the Hasidim and with a combination of prayer, motivation, sound strategy and determined guerilla warfare succeeded in routing the Seleucids in many battles. After defeating Antiochus’ councilor Lysias and his army in the battle of Bet Tzur, and with the retreat of Lysias to Syria, Yehuda and the Hasidim joyously entered the Temple in Jerusalem and rededicated it. The desecrated altar was broken up and buried and a new altar was erected in its place. New vessels were fashioned albiet of poorer materials. The date was 25 Kislev, 165 B.C.E., exactly three years to the date of Antiochus’ desecration. It was on this day that the Talmud recounts the commencement of the the eight day miracle of the oil.

Antiochus died within the year but Lysias returned as regent of, and with Antiochus V, the young son of the dead Antiochus IV.  This time Lysias came with an overwhelming force of 120,000 soldiers including cavalry and war elephants. There was little resistance the Hasidim could put up to this force and after gaining Beth Tzur and Bet Zecharia the Seleucid forces laid seige to Jerusalem.

At exactly this time, Lysias received a message that his rival Philip in Syria was organizing an army to wrest control of the government from him. Deeming it prudent to end his entanglement with the Jews, Lysias negotiated a treaty which included the abolishment of Antiochus’ anti Jewish laws. In spite of the treaty, when he was given permission to enter Jerusalem, he tore down the city walls. Nevertheless, Lysias immediately returned to Syria and the Jews were safe and at peace.

This event was declared by the sages a minor holiday and is mentioned in Megillat Ta’anit. It occured on the 28th of Shvat.

Several years after the conclusion of the treaty between the Judaeans and Lysias / Antiochus V, Demetrius I the son of Seleuces IV, escaped from Rome. He was acclaimed as king in Syria and quickly executed Lysias and Antiochus V. Through the intriques of the high priest Alcimus, Demetrios made war on Judaea. Yehuda HaMaccabee who still yearned for the day when the Judaeans would be totally free from the yoke of the Greeks continued to give battle. His support was weak, for most of the Hasidim had fought only when their religious independence was threated. After fighting fiercely and heroically, Yehuda was killed in 160 B.C.E. in battle by Bacchides the general of Demetrius.

Coins were struck by all the Ptolemaic and Seleucid kings mentioned on this page. Antiochus IV struck a large variety of bronze coins in addition to silver. Silver tetradrachms of his son Antiochus V also exist, but are much rarer, due to his short rule.

Both the Ptolemaics and the Seleucids struck coins in or around Israel. For the Ptolemaics coins were struck at Joppa – modern day Yafo. The Seleucids struck coins at Ake Ptolemais – modern day Akko. The coins of Joppa and Akko are scarce except for a large bronze issue of Antiochus IV, which although it does not bear any symbol or mintmark or Akko, is considered to have been struck there. This attribution was given to these coins because a great number of them were found in Akko and the immediate surrounding areas. 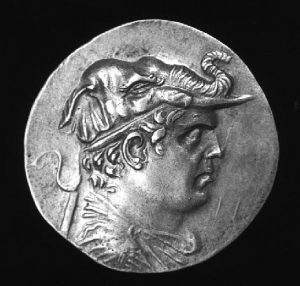